Slide the riveted section to the left to uncover a keyhole. Now, select the key and rotate the end until it matches this shape. Drag onto the keyhole and rotate the key to reveal a wrench. Take the wrench and skim around the safe until you see the Talisman sign.

Zoom in and drag the wrench onto the bolt holding it in place. Rotate to reveal a lens. Take the lens and rotate to the side of the safe with the large circular pattern in the middle. Looks like it's going to open, doesn't it? Slide that panel above to the left to reveal another keyhole. Rotate the key-end to fit again and unlock as before. The doors will slide open to show a series of gold rings.

Zoom into these and tap the viewing instrument now with a snazzy new lens to spot the invisible ink pattern. There'll be a lot of this kind of thing throughout the game. Rotate the circles until they line up. Use the ankh symbols to get your alignment right - it should look something like this.

Chapter 2 Rotate to the right until you reach the slightly shimmery side with the four-part combination lock. Zoom in and use the eyepiece, and you'll see a cube lurking inside surrounded by number fragments.


Rotate up, down, left, and right until you align the pieces to reveal the numbers for the combination lock. There's one on each side, so note down all four and their position on the cube. 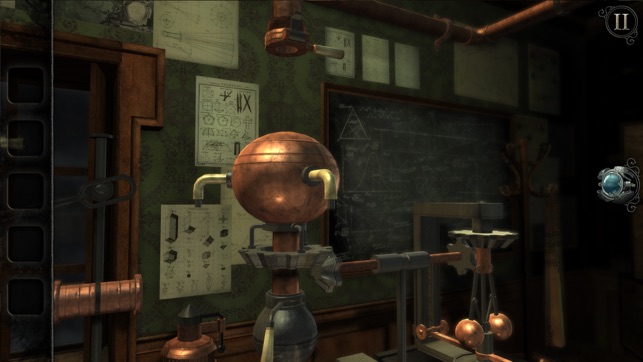 Remove the eyepiece and input the code it's 5, 2, 7, 6 starting from the left and moving clockwise to reveal a switch. Pull the switch down. See that golden ridged leg supporting the main box? It's slightly larger and brighter than the rest. Double-tap on it and rotate it to reveal a paraffin-soaked cotton strip. Now, double-tap the right-hand side of the lighter box and drag the paraffin strip onto the empty slot.

Flick the lighter wheel to set the paraffin alight and reveal a new switch. Pull the switch up. Zoom out and rotate to the opposite side of the main box. You'll note that the opposite leg has its own ridged golden section, but higher up. Zoom in and rotate it to reveal a telescope. Well, it doesn't look like a telescope yet, but a quick touch of the front section will make it come out of its shell. Go back to the light box, zoom in on those arms, and drag the telescope into place. Now, we need to get this thing wound up and working.


Zoom out and pop on the eyepiece. Scan around the box until you spot some fingerprints on one of the legs, which should be glowing bright green. Double-tap to zoom in on them, then touch to reveal a book. Pick up the book and tap it to take a closer look. You want to make space for the right-hand latch piece to rotate degrees, so rotate the top and bottom circles degrees, then the central segment 90 degrees.

Now, go back to the light box and zoom in on the left-hand side where the little door is. Flip the latch open to reveal the machine's innards.

How to enter The Room - iPhone, iPad, and Android walkthrough for Chapters 1 and 2

Drag the winding key onto the slot and rotate to get the machine started. Double-tap on the telescope to see a rather creepy, scratchy old moving picture with a schematic of the eyepiece in the background. Hmm, a clue? You bet it is. Slip on the eyepiece and look again. A code of some kind? We'll come back to that in a bit. Leave the picture and the little circular metal plate to the left will open to reveal another series of circles. You can match them up pretty easily according to the pattern, but you'll need to pop on that eyepiece and line up the more ornate goat skull pattern to crack this one and reveal a metal piece with the letter 'L' on it.

Now, rotate to the side of the box with the five-letter combination lock.

That's the first seal of three cracked! And now there's a new contraption to crack. First up: This symbol will be appearing repeatedly from now on. Now to crack a puzzle that will no doubt have been bugging you for this entire chapter - that four-symbol key code. You may have spotted some of the clues for this dotted around the box, but here they all are:.

Now, rotate to the top of the new pop-out box and push the slider to the side to reveal a strange-looking game board. Tilt your iPad until all four baubles are locked in place with their coloured side facing up. A drawer will open to the right-hand side. Zoom in and put on your eyepiece. Now, line up the fragmented image so that it forms a picture of the hex symbol we saw in the note. A new keyhole will appear. Put in the cross-shaped key and rotate to free the latches on the small drawer to the right. Now, rotate to the front of the box and insert the key into the tiny lock.

Rotate to open the safe.

Take the star emblem, and note how the keyhole changes shape. Yep, we'll be back. Move up to the top of the box and locate the star emblem, right on the spire. Insert the star-key to strip away some more of the box's layers. After reading the note, rotate around until you see the brass ring propped up against the box. Pick it up, then scroll down and zoom in to the left-hand surface of the pop-out box. Place the brass ring on the safe dial. Turn the dial as follows, with the locks removed from the equation once they engage you'll see what we mean: A cylindrical mechanism will slide out - push the two sliding switches up together to reveal another of those rotatable keys.

Go back to the front of the pop-out box and that transformed keyhole on the front. Look at the key and match the shape - note that there are two components this time around, which makes things slightly trickier. Zoom out and rotate to the side of the box with the cog emblem above a circular keyhole. Insert the round object you just obtained to break the second of the three seals. The Room is a puzzle adventure game from Fireproof Games, wherein you will need to solve very intricate puzzles in order to reach the end of several rooms along the way.

Gamezebo's walkthrough will provide you with detailed images, tips, information, and hints on how to play your best game. General Tips Swipe the screen to move the camera around. Double tap on items to zoom in on them for interaction. Pinch on screen to zoom in or out. You can replay chapters later on if you want to try your hand at any particular chapter later on.

If you find yourself completely stuck, maybe try manipulating something in your inventory or moving to another part of the puzzle. Completing steps out of order can sometimes screw you up. The usage of the eyepiece is also a common point where you might find yourself stuck. Tap on it to be shown secret items and areas you may never have seen otherwise.

Tilting and moving your device is a necessity in The Room.

When the guide calls for this, pick up your device and physically tilt it as instructed. Chapter 1. Subscribe to GameZebo.